Gilgamesh the King by Robert Silverberg

The encyclopedia entry on Robert Silverberg divides his prolific SF career into three phases – an early period full of by-the-numbers space adventures, the acclaimed 1966-1976 interval where he published several original classics and pushed the field forward, and a more “commercial” third phase with many longer works that did not excite the critics. Many of his post-1979 works, especially the Majipoor fantasy sequence, were nonetheless popular and I thought some of the titles from this period to be at least worth looking into.

The 1984 novel Gilgamesh the King is a full-sized retelling of the Epic of Gilgamesh, the famous legend of a Sumerian king’s tragic quest for immortality and thought to be the oldest written tale in history.

My favorite Gilgamesh interpretation has long been the “Rivers of Light” game that came with the 1986 Amiga software Adventure Construction Set, which had players retrace the journey for immortal life – including the monster in the cedar forest, the crossing of the deadly sea and many other episodes (but no Enkidu, if I remember correctly). I used the graphics and sound motif to make many of my own Gilgamesh-like adventures, so perhaps I was primed to enjoy Silverberg’s interpretation.

Adopting the point of view of Gilgamesh, Silverberg describes his life from his childhood as an heir to the throne of the city of Uruk, through many episodes as a wildly ambitious king, to his final acceptance of death at an old age. As a youth, Gilgamesh is considered a threat to his uncle (who inherits the throne after Gilgamesh’s father dies), and makes his name in the service of the rival city to the north. This escape, as well as his eventual rise to the power inside Uruk, is aided by a priestess (holy prostitute, actually) in the temple of Inanna. Just as the king attains god-like status in Uruk, so too does the priestess; the human story of the novel is thus reconciled with the direct relationship between king and Inanna of Sumerian legend. 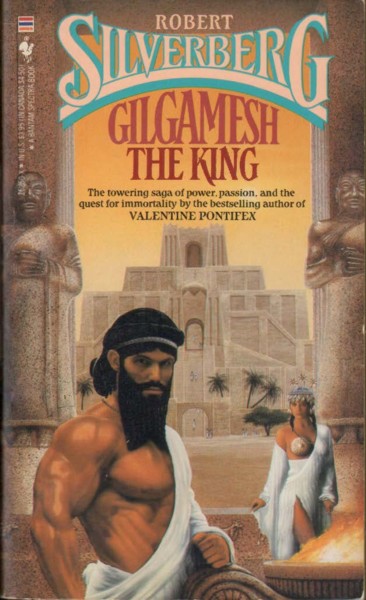 The other major relationship in the novel is the brotherhood that grows between Gilgamesh and Enkidu, a hairy wild-man originally sent to fight him (Gilgamesh had a tendency to consume his subjects in different ways). After a great wrestling match, the two become best friends and go on a series of quests together, including the battle of the monster in the cedar forest and the wrestling of a gargantuan bull running loose in the city. These feats eventually lead them out of political favor in the eyes of Inanna and other gods (like the myths of the Greeks and others, the unfairness of life is driven by the fragile egos of these deities).

The latter half of the story describes Gilgamesh’s quest for immortality, wherein he follows the trail of a local legend to places well outside of his dominion. Those familiar with the legend of Gilgamesh will know how this dogged pursuit eventually turns out, but it’s worth discovering how Silverberg deals with the many supernatural aspects of the legend. For those who haven’t any version the Sumerian epic, Silverberg’s version is at least as plausible as more direct translations.

The idea that death itself could be defeated possessed Gilgamesh following the passing of Enkidu, and the jealousy of Inanna fueled his desire to test the supremacy of the gods his people worshipped. Of course, his great quest leads him to the legendary immortal Utnapishtim, in a scene that unfolds rather rationally but tragically on multiple levels. Following this ultimate challenge to his place among mortals, Gilgamesh returns home to Uruk in a sequence of events that make up the weakest part of the book (the myth is over at that point), which to Silverberg’s credit does not drag. There is also less internal brooding than one might expect, which fits the character built up through the initial chapters – there’s simply too much to do in the life of a king for equivocating.

Maybe Gilgamesh the King is a longer and more “commercial” book than his second-phase masterpieces, but it is an entertaining read with interesting characters and reflects an understanding of the ancient Sumerians. 8/10.

former academic scientist and presently a software engineer. Also, a science fiction and crime fiction book-blogger.
View all posts by pete →
This entry was posted in books, historical fiction and tagged robert silverberg. Bookmark the permalink.

1 Response to Gilgamesh the King by Robert Silverberg