A Diet of Treacle by Lawrence Block

For the most part, reading the early books of famed crime writer Lawrence Block have been low-risk, entertaining tasks. I often see prototypes of characters later written into the Matthew Scudder series, but the plots have been consistently clear and settings evocative. Published inside pulp periodicals or as dime paperbacks, these were meant to be easily read and quickly digested. Hard Case Crime has been bringing several of them back into print, with original cover art. 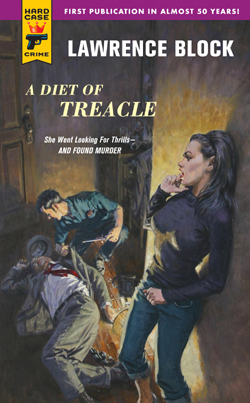 A Diet of Treacle (1961) is a bit of curveball by the early Block, with some insights on the drug-loving counterculture and a relatively slow pace in the action. The title comes from a quote inside Lewis Carroll’s Through the Looking Glass, referencing an illness shared by animals living at the bottom of a well, sustained by a diet of treacle (syrup). The treacle here, of course, is the drug-soaked “drop-out” lifestyle of Greenwich hipsters.

The midway point of ADoT is marked by a deadly confrontation between a city detective and the trio, which is evoked in the Chuck Pyle cover. I found the ensuing run from the murder scene an easy read, with some suspense in it. For me it’s the weaker half of the book, however, mainly because Anita and Joe are mostly spectators to the action. It seems like Block stopped struggling with making a deeper morality tale and played out the string with rather familiar plot events. It’s hard to see ADoT as fully satisfying to most readers, since the two halves seems to be trying to do different things. Block does successfully make a book out of it here, but its simplicity and uneven pacing leaves it short of his Scudder masterpieces, such as Eight Million Ways to Die or When the Sacred Ginmill Closes.

ADoT features Block’s favorite setting (lower Manhattan), his talent for constructing a compelling female character and one of my favorite themes of literature (drugs). It’s still kind of rough with respect to how (and why, frankly) the violence happens, but I put it on the better end of Block’s early novels. 6/10.

3 Responses to A Diet of Treacle by Lawrence Block