Out of Nowhere, by William Marshall

William Marshall’s Yellowthread Street mysteries are typically composed as multiple investigations happening in parallel, with one or two subplots being resolved in a way that is relevant to the main story thread. This in itself is nothing unusual, but the different plots within a Yellowthread novel relate to each other in highly unorthodox ways. A day or two after reading (and reviewing, unfortunately) Road Show, I became convinced that Marshall was probably not building his novel out of different events that tied together in the end. Instead, it was the structure by which these side-story events were presented that carried the true message: crime happens for reasons that are often unfathomable to anyone other than the perpetrators. This theme of indeterminism escaped my attention when trying to make sense out of Road Show. 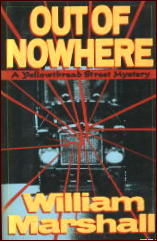 The events of Out of Nowhere (1988), the 13th entry in the Yellowthread Street series, similarly start off as inexplicable – both by themselves and in the way they would have anything to do with one another.

Perhaps I was better prepared after the frustrating Road Show, but to me, the carefully constructed Out Of Nowhere formed as compelling of a police procedural as the original Yellowthread Street.

He wondered what, like the gone village, what the people in the van, maybe one of them a woman, what all of them, once, had been.

The head-on crash is as bad of a wreck as could be imagined between two road vehicles. The four occupants of a rented van were heading full-speed down the wrong way on a highway when they collided into the front grill of a large truck. The back of the van was packed with plate glass, the shards of which shredded all four van riders to pieces and severed a hand from the truck driver.

Feiffer, the forensic investigator Macarthur and the head traffic investigator are all nonplussed at the scene. There was no attempt by the van to escape the collision, and they had been speeding the wrong way for miles. Two traffic cops in the area witness the van racing along, blaring the music from a Chinese opera at a high volume. Once he identifies the bodies, the mystery deepens, they appear to be four ordinary and respectable middle-aged people; a married couple and two others who have apparently nothing in common beyond their violent and suicidal death. If you’ve read the opening of the earlier Yellowthread mystery Gelignite, the role of the plate glass in this scene is more apparent from the start, highlighting local traditional views on the act of dying.

Meanwhile, Spencer and Auden enlist the services of Spencer’s dog Fang (formerly known as Petal) in chasing a Dalmatian that has been raiding the medicine shop of one Mr. Wah. Much of this story is told from the dogs’ perspectives, such as the moments after Fang fails to get out of Spencer’s squad car in time:

It as Mr. Wah’s laughing. A fine, proud dog like Fang wasn’t used to it. He bowed his head and snuggled closer to his friend Spencer.

For a good, hard, fighting dog like Fang, you had always to set a standard of stoicism in your own life. It was the first rule of man-to-dog bonding.

He swallowed hard. Without a word, Spencer, stoically, pulling gently on the leash, led poor Petal out of there and back toward the car.

The exchanges between Spencer, Fang and the exasperated Mr. Wuh form the best humor of this book, and make Fang into a compelling failed hero. Spencer’s attempts to train Fang to attack the Dalmatian on sight results in predictable disaster.

Finally, Inspector O’Yee is answering calls at the police station when a orphan contacts him, telling him about a strange pistol he pulled off of a dead man. At the start, O’Yee takes him seriously – as opposed to the many cranks who call the station with empty threats – but turns skeptical when the child Chi refuses to divulge details. This takes place as an extended conversation over several anxious phone calls, revealing the psychology behind the words between Chi and O’Yee:

These three situations play out independently until the end of the book, at which point they combine into the tragic backstory of the heinous traffic accident. Marshall picks his spots where he goes for the laughs, and keeps the tension alive in a book mostly about deciphering past events. I think the narrative comes together logically in this one, and there are plenty of interesting characters involved (including the dogs, of course). Out of Nowhere represents the unorthodox Yellowthread Street series at its apex. 8/10.

1 Response to Out of Nowhere, by William Marshall