God Save the Mark, by Donald Westlake

Films about confidence jobs have, almost by law, a series of short cons and a long con between them. As such, they fall into a familiar pattern of misdirection, a cast of half-drawn characters drifting in and out of the narrative, and some sort of twist ending. Usually, everyone is chasing around a hidden prize of some sort, called the macguffin in the screenwriting business. Fine for entertainment, but it amounts to pop-culture junk food.* There’s nothing wrong with that, and this blog attests to my frequent taste for literate junk food of various genres – just not the con-job story. Nonetheless, this one was a Westlake and had an encouraging “Edgar Award” sticker on its jacket, courtesy of the local library staff. 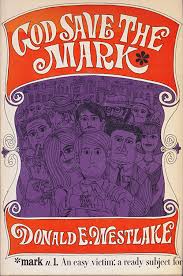 God Save the Mark is a 1967 macguffin-driven comedy novel, the macguffin in question being a mysterious inheritance left by a recently-deceased con man. Fred Fitch, a lifelong victim of schemes and capers, learns that his previously unknown Uncle Matt has left him upwards of 300,000 dollars in cash, gems and properties – and for once, it isn’t a fabrication. Fred really does have a deceased uncle that really did like him, anonymously, enough to leave him his fortune. As illustrated my the Rosenblum cover, a whole swarm of characters descend on Fred, making various efforts to separate him from his money. The mystery of GStM comes from the hidden relationships these predators have with each other, and whether Fred can actually understand them in time to protect his windfall.

Fred Fitch is the protagonist of the entire story, and his ownership of the point of view enables us to witness, in detail, his development from gullible to cynical, (seemingly) for the sake of his own survival. By his own description, he is a trusting dupe whose ordinary life is regularly taxed by small-time hoaxers, and he has developed a familiar relationship with the policeman Reilly, who is in charge of investigating such scams. In the first half of GStM he gets scammed by a fake police officer on his way to see Reilly, in the middle he buys an expensive bible, but towards the end he finally kicks a subway con-artist in shin.

Unrealistic by design, Fred makes the story as much a fable as it is a farce. We identify with his state of victimhood, to the extent that there are others out there skimming off a system that traps us in its middle. We can learn to ignore the junk mail and say no to the vanity publishers,** of course, but there are schemes out there too large, too encompassing to escape from. But, would a light comedy by Westlake, who must have had film option money in his sights, contain any indication of such a —

Steve said, “According to our information, you never met your Uncle Matt, is that right?”

“Never even heard of him, in fact.”

“Yet he left you with almost half a million bucks.”

“Before taxes,” he said. “Half a million before taxes.”

I’m in general agreement with this review (at the very least, read it for the attempt at adapting it into a movie); Fred is the most compelling aspect of GStM, a middling effort by Westlake standards. Hinted by his fluency with crosswords, Fred has strong sense of logic when he chooses to employ it. The two women that barge into his life, Gertie and Karen, keep him from using said logic for large parts of the novel, and it’s clear they’re making sure Fred is enjoying the adventure in spite of his worries. The character of Gertie is better described than Karen, who is introduced by Westlake on clumsy terms. Even though Fred’s imagination is captured by Karen, who is supposed to be rather mysterious, we never arrive at a convincing description of what makes her so captivating.

Fred Fitch is a rare character that is more interesting when he is sitting around thinking, than when he’s trying to take action. His efforts at eluding the many people watching him are folly, and are filled with all sorts of unnecessary details. Like with his earlier comedy The Busy Body, the details are there for Westlake’s observational humor about life and society in the 1960’s. Sometimes, this works (here, Fred has taken refuge within a walking crowd of younger people):

The Cadillac slithered by a came to a stop down near the corner.

At Fifth Avenue my platoon turned right. I was still trying to confound the Cadillac with one-way streets, and Fifth Avenue was one-way southbound, so I parted from the group there, turning to go in the opposite direction, saying, “See you later, alligator,” as a way of dating myself for them.

“See you, man,” one of them called after me, which I thought was very nice.

Now another female voice suddenly cried, “Harry, you’ll get the cops on us!”

The hoarse male voice roared, “Outa the way, Mabel, this time they’re gonna get it!”

From somewhere back there, something made a small sound. It sounded like pah. Near me a piece of metal went ting.

It happened again. First pah behind me, and then ting close by. And a third time. And a fourth time.

I didn’t get it until there was a pah, and instead of a ting there was a sudden burning sensation in my right leg, just above the knee, as though I’d been stung by a wasp. Then I realized what was happening.

Harry was shooting at me with a BB gun.

The latter block-quote looks like an extended example of something I didn’t enjoy reading in the first place, but it demonstrates one of the drawbacks of GStM. These passages are long, and when there’s no payoff in the humor end, there’s not payoff at all – we already know it’s a comedy and Fred will make it out of there.

The jokes and secondary characters in GStM are, for the most part, better constructed than the jokes and supporting cast of Westlake’s comic chase-novel from the prior year, The Busy Body. However, GStM lacks a criminal organization, an entity of bosses, sycophants and underlings that forms one of the most compelling characters in The Busy Body and other Westlake novels. This one won Westlake’s only Edgar award for a novel, but to me it’s strictly middle-of-the-pack material. 6/10.

* Actually, the con-job novels I remember best have been classics: The Grifters by Jim Thompson and The Talented Mr. Ripley by Patricia Highsmith. Definitely not junk food. The movies can get formulaic, however.

** Academia is rife with bogus journals, and pay-to-publish schemes. Well-known journals often retract article because of fraudulent data, undisclosed conflicts of interest or false authorship, long after they have crowded out legitimate research. It’s really a shame what scientific publishing has turned into.

former academic scientist and presently a software engineer. Also, a science fiction and crime fiction book-blogger.
View all posts by pete →
This entry was posted in books, crime fiction and tagged donald westlake. Bookmark the permalink.

5 Responses to God Save the Mark, by Donald Westlake