After his strong debut crime novel Little Girl Lost, Charles Ardai – using his pseudonym Richard Aleas – continues the story of the private investigator John Blake with Songs of Innocence (2007). SoI also continues the usage of a William Blake-inspired title, the death of a sex worker as the initial plot event, and a pre-existing relationship between Blake and the dead sex worker as the hook between character and story. However, this is a book that departs suddenly and dramatically from its shared setup. 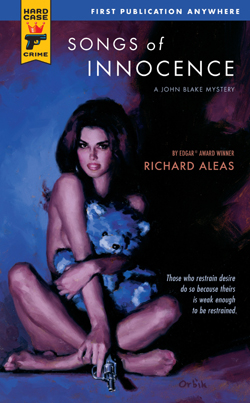 The first half of SoI is a build-up of Blake’s return to his old role — he had quit being a private eye at the end of Little Girl Lost — and the reconstruction of his deceased friend’s life. We know from the beginning that Dorrie Burke, a college student Blake meets at Columbia, was a independent sex worker who sold massages in her apartment, and that she suffered from depression. Dorrie described her profession in a series of deeply personal writing assignments for a class (excerpts from these accomplish a lot of exposition and character development, without repeating the pattern of flashbacks used in the first book), and confided in Blake when entering depressive episodes. When she turns up dead in her bathtub, next to pills and whiskey, and with a plastic bag around her head, Blake refuses to accept that her death is a suicide. She would have called him first, and he would have talked her out of it.

This takes place a full three years after the events of Little Girl Lost, and Blake hasn’t spoken to his old mentor Leo since then. The police are convinced that Dorrie caused her own death; suicides are common in her profession. Her double life had left her without trusted friends (beyond Blake) and she was alienated from her family. Blake thus sets out alone in finding Dorrie’s actual killer, putting himself at risk in the same way that Dorrie did: operating without protection.

There was a time when this would have all bothered me more than it did now — back before my high school girlfriend, who’d been headed for medical school to become an eye doctor, had ended up working as a stripper, and worse. Back before the years I spent, fresh out of NYU, doing legwork for Leo Hauser and getting to see every shitty thing one human being could do to another in the course of a day. Hell, if some men needed to pay to have a woman touch them and some women were willing to take the money, fine. If they both left feeling a little degraded by the experience, well, they didn’t have to repeat it. I’m no crusader. I hadn’t tried to talk Dorrie into quitting the job.

But now I couldn’t help wondering, would it have made a difference if I had? Was it one of her customers who’d done this to her, some crafty sociopath observant enough to spot Final Exit on her shelf and mirtazapine in her medicine cabinet?

Mirtazapine is an antidepressant that lost its patent in the United States in 2004; it would have been cheaper to buy, possibly as a generic, than Prozac or Zoloft. However, mirtazapine is a tricyclic antidepressant and was known to have severe side effects as well as withdrawal symptoms. I don’t recall it being explicitly discussed, but Dorrie was likely not taking the best medication for her condition. Nonetheless, Blake is convinced her death is the work of somebody else, either a client or a former business associate.

His suspicions about the latter possibility are encouraged after he tracks down the last massage parlor (Sunset Entertainment in Little Korea) where Dorrie was an employee. She had left after witnessing a vicious attack on another girl, a British-Korean named Julie, who had her hand smashed into pulp by a gangster nicknamed “E.T.”

Julie actually meets Blake on the Columbia campus, her hand still mostly paralyzed. She is a more scrappy version of the Susan character of the first book (who, incidentally, also has a small role in this one); she broke away from a massage parlor to start her own, but the criminals used to taking their cut from the business found her and sent E.T. to break up the operation. The physical attack was a byproduct of E.T.’s sadistic nature.

Just as Blake learns of E.T., a lieutenant of a feared Hungarian crime boss named Ardo, a man with a gun advances toward them. He takes Julie with him, having her feign (sort of) active resistance as they lead a chase through, and underneath, an old campus building. This scene is a little implausible, but it’s described well and the violence that ends it has a long sequence of consequences. Ardai again shows his strength in exploring the setup and aftermath of violence, rather than dwelling on the act of shooting, stabbing or beating itself.

Blake and Julie escape their attacker but not without injury. She has her hand re-broken and goes into the hospital for another reconstructive surgery. She has already told him too much for her own well-being, but he still has questions:

There was more I wanted to ask her. Like: What’s a Hungarian doing running the best spa in Little Korea? But her eyelids were drooping; the medicine they’d given her after surgery was kicking in.

“One last thing, Julie. Julie?” She forced her eyes open. “If I wanted to find the ads Dorrie ran after she left Sunset — the ones from when she went independent — what name would I search for?”

“The same name,” Julie said. Her voice was muzzy. “Cassandra.”

“I already looked up all the Cassandras on Craigslist,” I said. “They all had phone numbers — none were just email.”

She smiled. “You look under ‘Casual Encounters?'”

“No,” I said. “Why would I? That’s not pros, that’s just ordinary people looking to hook up.”

She closed her eyes again, sank back against the under-stuffed hospital pillow. “You’re so goddamn innocent,” she said.

Among the highlights of this passage is Ardai’s careful explanation of Craigslist and what people used it for in 2007. The Internet’s promise of anonymity was a boon for the sex industry, especially independent operators, but this still was a time when all of the secret information about a person could plausibly be contained within one or two email accounts and the hard drive of a single laptop. There is a fine focus on the state of technology at the time throughout this work and its predecessor. A noir story like this is essentially a story of information and its ownership; Ardai’s vision for the control and exposure of information makes his fiction an essential asset to the Hard Case Crime series and possibly the crime fiction genre in general.*

I enjoyed SoI more than I had expected to, given the familiar presence and the fact that the Blake character ended the first book essentially burned out of the gumshoe life. This is a carefully constructed and surprising story with a very dark resolution. Highly recommended as one of the best of the label. 8/10.

2 Responses to Songs of Innocence, by Charles Ardai (as Richard Aleas)