Cut Me In, by Ed McBain

My ongoing foray into vintage crime fiction meant that it was only a matter of time before I read by first Ed McBain book. Ed McBain, of course, is the most popular of several pseudonyms used by the very prolific Evan Hunter (1926-2005). Some of his long-obscure early work has been brought back into print by the publishers of the Hard Case Crime label. 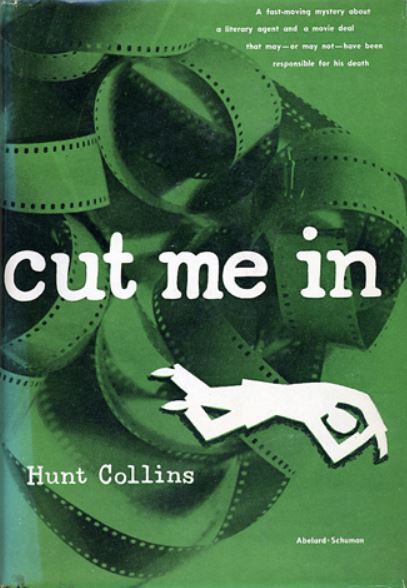 Cut Me In (1954) is early McBain novel that takes place in the insular and apparently cutthroat world of literary agents. It mostly takes place in various offices and apartments, stuck in the sweltering heat of a New York summer. Before McBain was an author, he was an agent himself, and he apparently put some of his least favorite memories into Cut Me In and its cast of treacherous characters. Little honesty is too be found in these pages.

Joshua Blake wanders in late to his company, a agency he founded with his partner Del Gilbert, to find Del dead on the floor of his office and the company safe left gaping open. They did not keep cash in the safe, only contracts, but one contract of particular importance is missing — an agreement for control of the movie rights for the works of one Cam Stewart. Stewart is a popular author of pulp Westerns, and the contract was an unlikely stroke of luck, promising years of unearned riches for the two agents.

It’s not essential to the plot, but Cam Stewart (in this conversation with Blake, at the writer’s posh Connecticut estate) reveals the source material of the successful “Draw Hudson” yarns:

“And then came Draw Hudson.”

“The milkman. He was long and lean, with grey eyes and thin lips. He had a deep tan from being outside so much, and he had a horse — a real horse — pulling his wagon. You very rarely see horse-drawn milk wagons anymore, but he had one. He called his horse Duke, though I think she was a mare.”

“That’s what Hudson calls his horse, isn’t it?”

“Sure. Hudson is the milkman, but for Christ’s sake, don’t tell anyone.”

“You don’t huh? You should have seen that milkman. I bet he was responsible for more broken homes than the San Fransisco Earthquake.”

“So you took your milkman, sexed him up, gave him two six-guns, a batch of women ready to tumble into bed, and you revolutionized the Western.”

This is what McBain gives us: a this-is-how-it’s-done perspective in extended passages of dialogue, almost always between contentious parties. In this case, it is Blake and Cam Stewart, after Stewart claimed no memory of having signed the contract. Other agencies have swarmed into the picture, ready to cut Blake and Gilbert out of the money. To get his rightful share, Blake has to come up with a copy of the agreement that went missing the same morning — in the same place — that Del Gilbert was killed.

The link between the business crisis and the murder is clear to Blake, but the police detective in charge of the case expresses his doubts. A much simple motivation is more likely, he argues, especially since the gun that killed Del also put two holes in the opposite wall of the office — not a sign of a professional killing. Blake is a suspect himself, and does not help the police by concealing his own involvement with Del’s jealous wife.

Throughout Cut Me In, Blake sweats through his shirts and tracks down both his missing contract, or at least a “photostat” copy of it, and the killer of his partner. He is far more concerned about his share of the “Draw Hudson” cash than he is about the murderer, and this causes him to overlook the increasingly obvious identity of the latter. All four of the women in the story, including Del’s wife and mistress, are willing to shed their clothes and throw themselves at Blake in a repeatedly brazen fashion. McBain isn’t attempting to construct a deep and serious novel here; he is following Cam Stewart’s formula, only instead of six-shooters he arms Blake with gobs of cynicism.

Blake and his partner are portrayed as predatory middlemen who snatch up whatever percentages they can get their hands on. Blake thinks he’s only standing up for himself against larger agencies through hardball negotiating, and the first-person perspective of the novel is nearly devoid of self-reflection. The real hero may be a frustrated author named Gunnerson, a simple and burly man who beats Blake up because of the way the agent dismisses him. Cut Me In is both formulaic and a statement on the formula of pulp fiction. It works more often than it doesn’t. 6/10.

NOTE: The Hard Case Crime edition of Cut Me In comes with “Now Die in It,” a long-lost novelette featuring Matt Cordell, apparently a series character of McBain’s. It’s a readable piece of private-eye fiction.

7 Responses to Cut Me In, by Ed McBain