In the comments of my last review of Simak’s work, a 1970 novel named Out of Their Heads, it was suggested (in agreement with the critical convention), that the book was published after the author’s creative prime. I ended up giving it a thoroughly middling rating (the lowest out of several Simak reading experiences, in fact), putting me in no position to argue.

They Walked Like Men, from 1962, is also an uncelebrated Simak novel, but it hails from the era of the Hugo-winning Way Station and “The Big Front Yard.” It is a compact alien-invasion yarn with some interesting characteristics than separate it from the pulp tales of bug-eyed creatures out of the so-called “Golden Age.” However, these same characteristics — intentionally, I believe — recall the separation from a more significant “golden age.” That is, the time when American monetary policy was based on the gold standard. 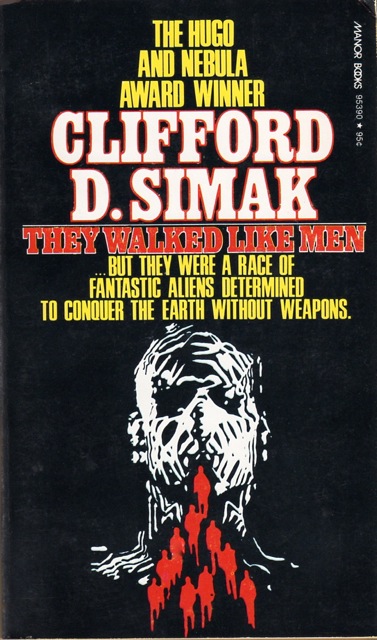 Newspaper man Parker is stumbling home to his dingy apartment after a night of drinking. Before he reaches his door, he bends over to find a dropped key. He notices that a three-foot semicircle in front of his door is not the original carpeting, but a papery cover over what appears to be a kind of animal trap. Backing away from it, he watches the thing lose its form and reshape itself into a ball. The thing rolls away down the apartment stairwell; the first instance of Parker encountering shape-shifting alien bowling balls.

Parker soon embarks on a solo fact-finding mission, conveniently driven by his professional pursuit of a story. It’s a handy plot device for Simak, who at least can sell the character from his own career experiences as a reporter. People everywhere are being bid out of their homes and businesses by a company with seemingly endless supplies of cash. As soon as the purchase is made, the home, store or shopping mall is closed off. Many in the city are jobless, or living out of their cars in search of a new residence.

Parker encounters more and more strange stories of ball-shaped aliens and interacts with odd-smelling decision-makers, until he finally breaks into an office building of the financier behind the mass of buyouts. In the executive suite, he pulls aside a heavy curtain to reveal a wardrobe for the entire staff:

I stood there, gaping at them. And as I look at them, I began to see them, not as a mass of garments, but as separate garments. There were men’s suits an topcoats; there were half a dozen shirts; there was a hanger full of ties. On the shelf above the rack, hats were primly arranged. There were women’s suits and dresses and some rather frilly garments that I suppose you cold call gowns. There was underclothing, both men’s and women’s; there were socks and stockings. Underneath the clothing, on a long rack standing on the floor, shoes were precisely placed, again both men’s and women’s.

While TWLM was published in the early 1960s, a historically low period of inflation, it carries some obvious anxieties over the policies (and existence) of the Federal Reserve, which had been gradually regrading the physical value of currency since its creation in 1913. The “Nixon shock” of abandoning the gold standard did not happen until 1971, but there were still anxieties over the government’s increasing tendency to create money out of nothing and then charging a cost of borrowing it to the general public, thereby concentrating economic power in the hands of unelected bankers. The presence of debt in a world of rising asset prices haunts the everyday denizens of Simak’s Midwestern city, coaxing them out of their homes and businesses with cash — before they learn that there is no larger house on the market to buy.

But, as explained by an alien to Parker in a late-story confrontation, it is not only our ignorance about money that makes us vulnerable, but the irrational reverence we have for it:

Money here on Earth is more than the paper or the metal that you use for money, more than the rows of figures that account for money. Here on Earth you have given money a symbolism such as no medium of exchange has anywhere else that I have known or heard of. You have made it a power and a virtue and you have made the lack of it despicable and somehow even criminal. You measure men by money and you calibrate success with money and you almost worship money.

This spin on the alien invasion story, a rich vein for SF ever since H.G. Wells came out with The War of the Worlds, has an uncommonly sharp satirical edge. Our own monetary institutions, and the inability of the common man to understand their power or insensitivity, are just as dangerous as spindle-legged giant robots and heat rays. Despite its potency, the theme of conquest through wealth is not hinted at by any of the cover art for the various editions of TWLM, with the notable exception of the original hardcover. 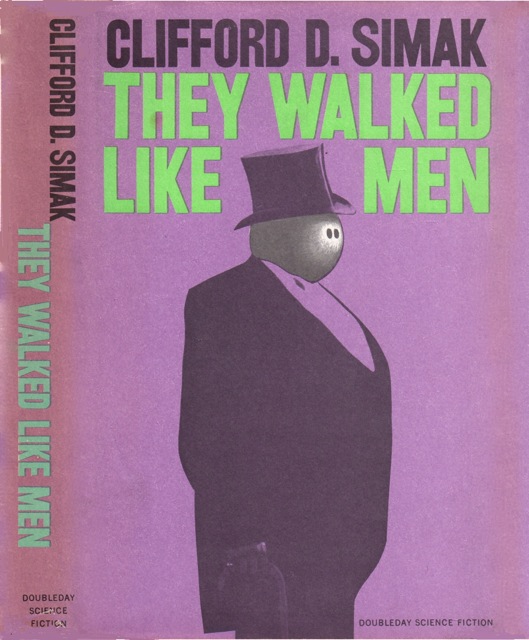 There are certainly many conventional parts to TWLM, and I’m not tempted to claim classic status for it. For example, the bowling ball aliens are explained in part by another, more benevolent alien who takes the form of a talking dog. Parker has a casual love interest who predictably draws closer to him as they contend with the invasion (she at least shows competence and strong will of her own, however). The other female character is a prototypical “icy” blonde. However, the inscrutability of the economic forces that rule our modern society plays well with Simak’s trademark use of characters who never fully grasp the motivations of the aliens they encounter. The novel is also a definite narrative improvement over the fantasy Out of Their Minds, which in my opinion made a hash out of its ending. TWLM is recommended for Simak readers, as a worthwhile foray into his concerns about the people around whom he spent his professional life. 7/10.

6 Responses to They Walked Like Men, by Clifford Simak