Witness to Myself, by Seymour Shubin

One of the reasons I’ve sought out and read so many Hard Case Crime books is the introduction to quality authors who have, over time, faded into obscurity. The online footprint of Seymour Shubin (1921-2014), for instance, lacks a dedicated Wikipedia page despite having won an Edgar Award. Based in Philadelphia, Shubin wrote novels and articles throughout a long but intermittent freelance career.

I learned from a podcast (I forgot which one, sorry) that Shubin’s Witness to Myself (2006) was the only release from Hard Case Crime that did not feature a woman on the cover, and was consequently the poorest-selling book for the imprint. That is a bit of a shame, since WtM is among the best of the HCC titles that I have read to date. 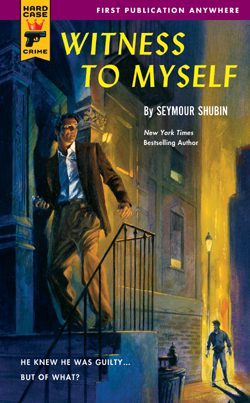 WtM begins with telling the story of Alan Benning, a privileged but socially awkward teenager on a family road trip. His parents have taken him to a remote beach on Cape Cod, where he decides to kill time by going running. He cuts through some nearby woods and encounters a young girl whose kite was stuck in a tree. After retrieving the kite, he follows some mysterious impulse and sexually assaults the girl before throwing her to the ground. He then flees the scene on foot, escaping notice and culpability but not knowing just what crimes he committed.

The family vacation ends after several days and the Bennings return home with no sign of the police. Although Alan appears to have gotten away with his crime, all of his interactions are under the shadow of his hidden guilt.

His father sat down on a chair facing him.

“Alan, I want to talk to you about something. And I hope it doesn’t get you angry.”

Alan just stared at him.

“I should have talked to you about this before but I was really afraid you’d get angry. And I didn’t think you needed it. In fact I still don’t. But your mother and I, you know, feel I should. It’s about drugs.”

The point-of-view is told from a third person’s perspective, and we learn that Alan’s story is told by a lifelong friend of his, a writer. The writer is less wealthy, less complicated and far less interesting than Alan himself, but takes up relatively little of WtM as a character. His existence does solve Shubin’s problem of access to Alan’s inner thoughts without requiring us to sympathize with him. Alan the teenager is purposefully less explicable than Alan the adult; the writer, relying on the recollections of another person, does not have a complete explanation over long-ago events.

Alan’s choices as an adult, living with both guilt and uncertainty over what he has done, form the meat of the novel. He becomes a successful and zealously guards his secrets: the facts of what his crime, as well as what he thinks is his secret nature. In one incident, he gets in an escalated argument over a parking spot:

He started to walk away from Alan, then turned and strode back, and after more shouted back and forth they were swinging at each other. A couple of minutes later, as they both stood there out of breath but with their fists still clenched, a police car pulled in, siren whining, in response to somebody’s phone call.

The cop didn’t take either of them in but several days later Alan got notice that he was to appear in Municipal Court: The other fellow was accusing him of attacking him. He was cleared, but in a sense it didn’t matter. What mattered was that he had lost his temper in such a stupid way.

And it heightened the fear he’d had ever since the crime, that violence was a part of him.

We see the benefits of the narrator’s style; he is an author of “true crime” books, and produces the efficient and clear paragraphs of a good reporter. It reminded me of the outstanding work done by John Diedrich of the Milwaukee Journal-Sentinel, when reporting the Michael Lock story. A more famous example would be the multipart feature David Simon wrote about Melvin Williams for the Baltimore Sun. I read WtM as a fictional version of one of these newspaper features.

Despite his persistent fears, Alan eventually starts to master the trappings of adulthood. He manages to start a serious relationship with a nurse he meets when recovering from surgery. When he returns to the hospital to learn her name, he finds that she suddenly quit her job and made odd impressions on her coworkers. This apparently intrigued him further, since she was probably an “outsider” like him. He also thrives as a lawyer and gets recruited into a position with a (uncomfortably for him) high profile.

After losing his father to a stroke and his mother to dementia, the ties binding him to his past seem to loosen. That is, until he drives back to the small town in Cape Cod to research what exactly happened to his victim.

Shubin does a good job placing his story in two eras; Alan committed his crime around 1990 but returns to the scene after the advent of the Information Age. Leaving unnoticed and untraced is not as easy of a task as it used to be. The daily newspaper was still a presence in 2005, overlapping with email and internet search engines–Alan’s chances may have been better had he waited still another decade.

Alan’s pursuit of his past quickly evolves into a frantic attempt at escaping it, at the cost of his professional reputation and his relationships. Shubin does a fine job representing Alan’s emotions and motives through the filter of a reporter, following him from the drive into Cape Cod to the final confrontation at his Philadelphia apartment.* Alan is not a sympathetic character but a compelling one, with many of his deepest emotions left implicit. 8/10.

* The Schwinger cover painting features a classical doorway frontispiece of a brick row house, indicative of the northeastern urban setting.